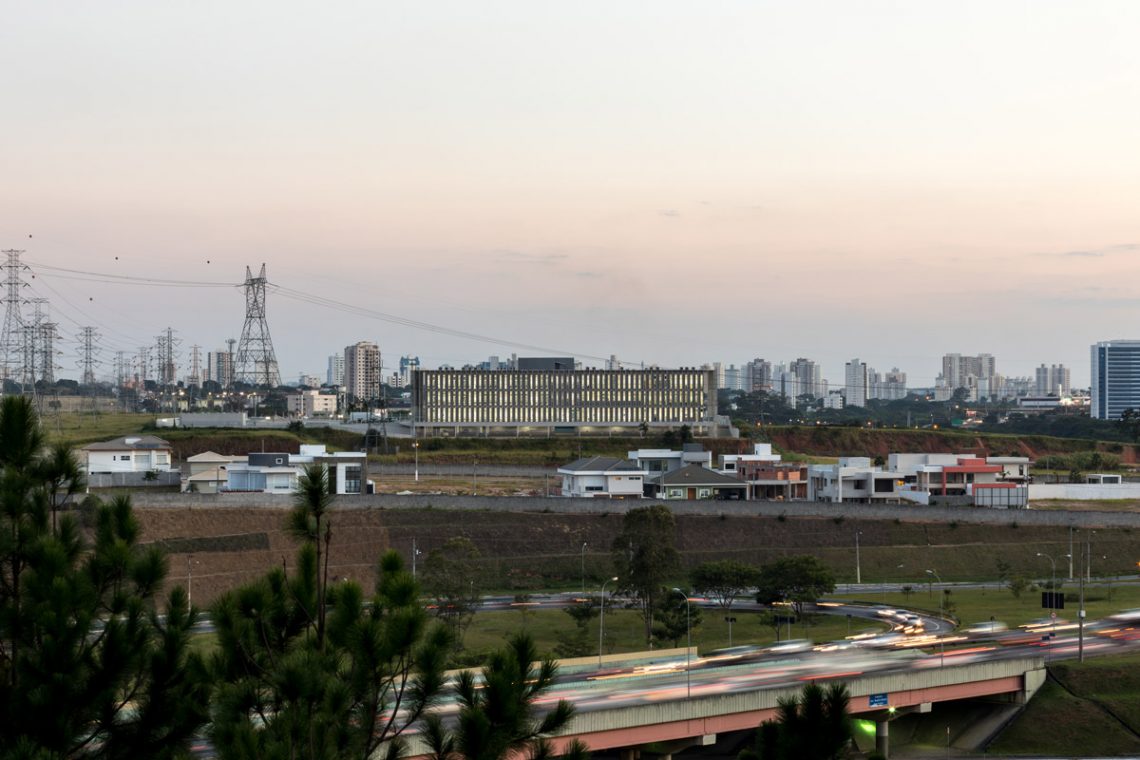 A year after the official launch of KAAN Architecten’s second outpost in São Paulo (Brazil), the Dutch firm completes two new buildings, which will house the new campuses of the Universidade Anhembi Morumbi in São José dos Campos and Piracicaba, in the inland of São Paulo State. The projects were coordinated by BRC Group.

Both buildings have been driven by the same design choices: to create an elegant yet strong architectural identity for the campuses of the Universidade Anhembi Morumbi through a non-scale approach to the representative façades, providing the students and the institution with a generous central common space that promotes social interaction and responds to the hot Brazilian climate of these regions by allowing greater circulation of natural air.

Located in proximity to a main road junction, the future campus in São José dos Campos stands like a modern day Acropolis on an elevated plot, which creates isolation and the ideal conditions to turn it into a new reference point amid the dense urban fabric. In Piracicaba, the new building occupies a plot along a secondary urban expansion axis in the southern part of the city.

By optimizing the topographical characteristics of their areas and thanks to the balanced façade geometries, both projects are landmarks that firmly and visually open themselves to the city, giving the University a recognizable position within the architectural panorama. The buildings have different volumetric proportions. São José dos Campos encompasses a more compact structure and consists of three floors with a total area of 5.300 sqm, while Piracicaba, is horizontally developed and lies on the slope of the surrounding landscape, directly dialoguing with it.

The intense Brazilian solar radiation is mitigated by a fully encompassing system of vertical slabs that fulfills the need for shade in every façade. Choosing a regular structural system enabled KAAN Architecten to feature glass in between the thin concrete slabs and the roof beams. In the case of São José dos Campos, this was molded in-situ, relying on the expertise of the local workforce, while in Piracicaba, it was prefabricated to enhance sharpness and exactitude in the attachment system.

The wide use of glass in the façades enhances transparency and reveals a deep connection with the architecture of the cities. Moreover, a caramel resin floor comfortably reflects the abundant natural light in the social core and passageways of the buildings. The natural ventilation and light are optimized via a ceiling pergola in concrete and smaller wooden elements acting as sun blades.

The shared program features classrooms, diverse laboratories for practice exercises and simulation, a space for the cafeteria, physiotherapy facilities, a library and offices. All educational spaces are situated alongside the longitudinal glazed façades to take advantage of the natural light and have been oriented towards the large-scale central void, to embody the buildings’ core social identity and its essence as a place for encounters, human connection and knowledge exchange.

Following a careful analysis of the structural opportunities, a system of ribbed slabs made possible by in-situ molded concrete was adopted in the São José dos Campos building. In Piracicaba instead a system of alveolar slabs was employed, exploring the best possibilities of precast concrete. These choices allow wide free spans and a significant modularity of space based on a rigid 1.50 x 1.50 meter grid. Moreover, the in-depth study into solar radiation results in large floor-to-ceiling windows, which grant abundant daylight to classrooms and laboratories, playing with the deep shadows generated by the vertical concrete elements. Sustainability plays a central role in the design of the two campuses, which feature an innovative energy management system for thermal control to prevent refrigeration waste and enhance the efficiency of the roof system with chimney effect. The use of BIM software and technology is also at the core of both projects: each façade has been designed following specific comfort studies, resulting in a wide protection porch for the north and south elevations, and in a dense grid of vertical brise-soleil for the east and west elevations.